Where it all began...

My introduction to radios started out as an early teenager, if not earlier. I was a JR Fireman at the time and my first real experience of talking on radios was being a dispatcher for the Marblehead Fire Department in Marblehead, Ohio. I rode my bike to the fire station and if I did not make any of the equipment leaving the station, I manned the radio. This was my first real introduction to a "callsign" if you will, as the Marblehead Fire Department's issued FCC "callsign" was KQG605. I would log all of the radio traffic on the dispatch log with times and would assist as needed passing messages via the telephone. (I would also give the 6pm pager test, so my fear of talking on the radio was short lived)

Many of my friends were using CB radios to communicate. I purchased a mobile radio and was introduced to SSB. And I also got my first experience with "shooting skip" as I talked with many other CBers outside of my home state. Being able to talk across the country was just amazing to me. It was not the first time I heard "DX" as our low band frequencies for fire and EMS were on 33 MHz. It was not uncommon to hear other fire departments being toned to calls, many of which I had never heard before. And I knew they were west of Ohio, due to the time difference when they gave a time for whatever reason. I also remember hearing some closer "skip" as I would hear a police dispatcher who was from southern Ohio often times when the band would open. My mobile passion turned into a "I need to have a radio at home" passion and my first base station was purchased, a President Washington. 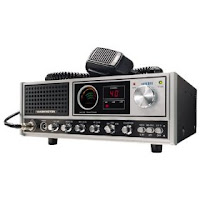 Soon afterwards, I found out that antennas make a world of difference and so I went forth and purchased a Super Scanner CB antenna. To this day, I think that was the neatest antenna and if I had it still, I would convert it for the ham bands.

The Super Scanner antenna was neat because I could direct my transmission one of four different ways. I had one "leg" or element pointed to the north, one leg pointed to the SE and one to the SW. I could also activate all of the elements and it would transmit as a ground plane in all directions. Being so far north, most of my chatting or DX'ing was with stations to the south, but I did have a few friends up in Canada and Michigan that I would talk with. Living on Lake Erie made for some good propagation, and shooting across the water made it easy to talk with others well over 25-50 miles away.

One of my good friends, Don Roeser (KF8FE), whom I met on the CB radio, informed me of Novice Enhancement. Don laughingly told me that if I wanted to chat with him, I had better get my Ham Radio license. So, in a conversation with my mother one day, she told me that she knew a very nice person who she thought was a ham radio operator. He had a large antenna at his house and he lived only a few blocks away. So, I got up the nerve, knocked on his door one day, and that would be the day that started my ham radio venture. This person was Ralph Metheny, WA8GAK. Ralph took me in and we sat down in his shack. I'm sure my expression said it all, as I was nearly speechless. Ralph had an Icom radio and he was listening to the Maritime Mobile Service Net. At the time, I believe it was on 14.313. Ralph checked into the net (I believe Ralph would fill in as a net control while in Ohio during the summer and Florida during the winters) and I knew that this was a hobby I just HAD to do!! Ralph gave me the information for the ARRL (American Radio Relay League). Since this was before the internet boom, I took a coupon that Ralph gave me an I ordered up Tune in the World with Ham Radio book and the 5 wpm cassette tape that would teach me Morse code. I still have my actual book as viewed in this photograph. 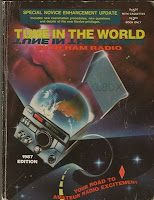 I worked at a local water plant, so I spent my evenings walking around listening to my code tape, learning 5 wpm on my portable cassette player. Then in December of 1987, I made the trek to Fremont, Ohio. There I took my Novice exam on December 12, 1987. I passed my Morse code exam with 100 + perfect copy on my characters and also I correctly answered 10 out 10 questions about what had been sent. I passed my written theory test just a few days later on December 14th, 1987. I scored a 96% missing only one question. I was on a roll and I went on to pass my Technician class exam on Jan 9th, 1988 by correctly answering 25 out of 25 questions. I had a bit of extra time as it took at least 6 weeks to get your original license (again, no internet) and there had been a problem with my original 610 form. So, it was resubmitted and I decided to take the extra time to study for my General Class license.

My General Class license was a bit harder as I did not get my 13 wpm code on the first attempt. I did pass my theory on February 7th, 1988 in Elyria, Ohio. I then continued to work on my 13 wpm (at this time, I had just received my Novice license in the mail landing the callsign of KB8DVT). I headed to Maumee, Ohio and passed my 13 wpm code test on Feburary 13th, 1988 answering all 10 questions correctly.

I had some great encouragement from friends, especially Don, KF8FE (at the time, his callsign was N8JFZ). I decided to jump right into my Advanced Class license studying. I needed a hand with the saturated electronic theory, so I asked for the assistance of another ham friend, Gary Fiber (now K8IZ). I headed to Port Clinton and spent some time with Gary as he helped explain the electronic theory questions to me. After lots of simple explanation, I went on to pass my Advanced Class license exam on March 12th, 1988. I missed 3 out of the 50 quesitons asked landing a final score of 94%. Yep, I was happy. Now it was time to focus on the 20 wpm and the Extra Class exam. I was not going alone though. I took the opportunity to push my old friend Don to upgrade as well. Together we both upgraded and I landed my Extra Class license in April or May of 1988 (can't seem to find my notes or my Extra Class study book where I made notes of my progress). Either way, I made it to the top and while on the way, I opted to change my callsign when I passed my Advanced Class license. My licenses finally caught up with my test taking and I received the callsign KE8RO. I thought this was a good CW callsign and I had worked the Queen Mary several times, W6RO and I just liked that darn suffix.

I kept my 2x2 callsign until moving to Alaska in 2003. Rather than signing /KL7 all the time, I decided to apply for a vanity callsign. I enjoyed sending my 8land callsign for so many years, so I decided I wanted a KL8 to signify being from the 8th call area. I wanted KL8RO, but figured after sending KE8RO for so many years, I would get into the heat of the moment and send my old callsign rather than KL8RO. I enjoyed DX'ing and I thought why not KL8DX? I applied for that as my first choice and the rest is history.

Little did I know the confusion KL8DX would cause when I got on the air. Seemed I was immediately confused with KL7DX, for good reason. I had even considered changing my callsign again but I thought better of it. It took more than a year and a half of working in many of the major contests before hams started listening for the number in the callsign. After a few years of operating, I still get confused with KL7DX, but not nearly as often. And to top it off, I have had the privilege of operating the KL7DX callsign on RTTY.

My wife studied and passed her tests, earning the callsign of KL1VB on January of 2007. She changed her callsign to KL8SU, and operates her 2 meter / 440 radio when we head out into the backcountry on our ATV's and when she is mobile. I still have hopes that my youngest daughter will someday have the time to study and obtain her license. The interest is there, just her college studies, work, and her travels don't leave much time.

It sure has been a fun journey from my very first shack, which was in my bedroom of my parents house back in Lakeside, Ohio. My very first rig was the brand new Icom 735.

This radio was on the inside front cover of my Tune in the World with Ham Radio study guide. I fell in love with that radio as soon as I cracked that book open. I have been an avid Icom fan ever since, owning a IC-737A, IC-765 and my current rigs IC-756PRO and IC-751A. Here you can see my Icom 735 along with my Icom 28-H 2 meter radio. Also seen in this photograph is my Ameritron AL-80A amplifier and my Commodore computer with disk drive and PK64 interface for packet. Before the internet hit it big, I would access the BBS, N8FIS, in Fremont, Ohio. I also would use DX Clusters in Michigan, and to either side of my old QTH in Toledo or Cleveland. I at one time had my own DX Cluster with hopes of connecting the nodes between Cleveland and Toledo but I just did not have the elevation to make it a reliable connection. I've been DX'ing ever since and more recently, starting to dabble in contesting. I have met a great group of contesters here in Alaska and they have been very helpful in helping this contesting greenhorn. I have a long way to go, but recently during Field Day, I made the trip to KL2R north of Fairbanks. This was my first group setting and I had the time of my life (more on this in a seperate thread). I have high hopes to operate from KL2R many more times and I hope to head to Willow to meet with with AL1G and the gang down there along with making the drive down Big Lake and to see WL7O and KL7OU's station. I then hope to head to KL7RA and meeting Rich and the contest crew personally.

Operating from Alaska is very different than operating from Ohio. It's not uncommon to get pile-ups when you call CQ on the bands. This has been something new for me and I'm learning to manage such things. Also, the propagation is extremely challenging. I currently operate CW, RTTY, PSK, SSTV, and SSB. I enjoy giving out Alaska to those that need it but I also enjoy the few and far between ragchews.

Now you know where it all began.