This past weekend was the CQ World Wide RTTY DX Contest. I look forward to this contest each and every year however, this year I had to work for most of the weekend. This limited my activity dramatically and by the time the weekend was over, I was only able to operate 6¾ hours. But as with any contest, even a short amount of operating time can be fun. This weekend was no different but Sunday turned out to be one BIG surprise.
The Solar Flux Index topped out at 190 and the A & K Indexes hit the sweet spot allowing lots of 15 and 10 meter activity. I never ventured to 15 meters but when I checked the 10 meter band on Sunday, I about fell out of my chair with the signals I saw on the spectrum scope of my IC-756PRO!
My operating began about 1½ hours after the contest began. I started out on 20 meters and was able to hang out on the band for about 15 minutes. I returned around 0400z and found a clear frequency (or somewhat clear) on 20 meters and began calling CQ. I worked stations until around 0505z.  I did not make it back to the band until 2230z where I once again called CQ after squeezing in between RTTY signals. I stuck around until 0125z. I had a sked to chat with my long time friend and old neighbor, Sean KL1SF/K7. I ended up enjoying a lengthy QSO with Sean on 20 meters. After our QSO, I jumped back to RTTY from 0420z to 0448z. I was off the air until Sunday.
When I returned home I immediately turned on the radio and I saw lots of activity on 20 meters. I decided to check 10 meters and was shocked at the activity I saw on my spectrum scope! 10 meters, really? I warmed up the AMP and prepared my wife for my few hour absence as I was going to work the remainder of the contest on 10 meters! I got back on the air at 2048z and the fun began!!
Once again, I was amazed at the strong signals and multiple propagation paths experienced on 10 meters! A pipeline to South America, several points of the lower 48 from the East Coast to the West Coast. I felt like I had won the DX Lottery! I have experienced some 10 meter openings and I thought my last was the best but this opening topped that one. I have to say, the openings keep getting better and better on 10 meters lately. I can remember spending hours on 10 meters when I lived in Ohio, and I even obtained DXCC on 10 meters from back there.  I can only hope that as the solar cycle continues ahead that the band conditions for 10 meters keep getting better.
In speaking of Ohio, it was great to run into my long time friend Dan, W8CAR. I was able to work Dan along with many other Ohio stations! Rick, WB8JUI is also a regular in my log during the contest season and it was great to work him on 10 meters as well. Both live not far from my old QTH. I was hoping to catch Dave, KE8M on 10 meters but I only worked him on 20 in this contest! Maybe the next one Dave??
I worked lots of regulars on 10 meters but the highlight was the DX. Some were total surprises as I had never before heard them on 10 meters or the fact that I had been pointed to the lower 48 and I worked them off of the side or corner of my beam! Extracting a list of DX stations worked from my log I find the following;
LS1D
VP8NO
VP9I
ZX2B
HK3Q
EF8M
XE1GRR
XE1EE
XE2CQ
XE2K
LU8EOT
LW5ER
ZY2C
LU7HN
ZP5AA
XE3N
LW9ETQ
DS4GKG
PY2VZ
PY2SRB
JE8CLT
VP8NO and EF8M received my 10 meter RTTY "Wow Factor" from this station.
I sent my log off to the contest robot but I decided to enter as a single band
10 meter entry, only because I could. I enjoy contesting for sure and being a
seasoned greenhorn to contesting, I'm a DX'er by choice. I will take 200 QSO's
on 10 meters over 1,400 QSO's on 20 meters any day! In the end, it's not about my final score, it's about having fun. I won't forget that RTTY buzz of stations calling me for a very long time. Thanks to all those that I worked and also to those for trying who may not have made it through. My LOTW stats this morning showed that I went from 36 states confirmed via LOTW on 10 meters to 41! I'm hoping that number increases and my 10 meter WAS, which was once not a reality in my book, may actually become one! Thank you 10 meters for making my weekend!
Posted by KL8DX at 9:21 AM 4 comments: 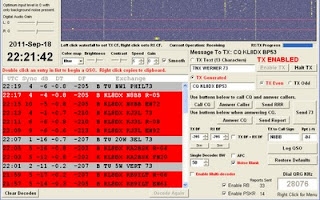 The day began as usual with my daily chores but little did I know, today was going to end up a bit different than I had planned. After finishing my morning duties, I decided to check the radio one last time before I headed outdoors. I saw some 10 meter activity so on a whim, I decided to check the beacon portion of 10 meters. I normally start at 28.300 looking for K6FRC/B however, there was no signal there. I did however see a signal just below that and low and behold, it was a beacon! I copied the beacon around 1810z to be NS9RC in Illinois. This was the first time I had heard that beacon. I tuned around a bit more and heard other beacons as far east as Michigan. I hit the power on the amplifier and I went scouting for stations.
I don't operate SSB much but when 10 opens, it is always easier to find stations on SSB. My first contact was with TI8II, who was booming in. It was apparent that the propagation path was to Central and South America after tuning the band. As I tuned around, I was hearing stations in the lower 48 too, not as strong but they were easily heard. I found an open frequency and called CQ.
It was not long before I had a few stations calling me and I was surprised to find out that I had a very good path into Florida. I worked several stations in Florida and Georgia but to my surprise, I also worked stations north and west of those states! Ten meters was open here from roughly 1830z through 0145z! In that time, I worked SSB, JT65A, RTTY, and CW. By the time the dust cleared, I worked the following states or Canadian prefixes; FL, WI, MN, OK, VA, MO, NJ, IL, NE, AR, CO, NC, KS, IA, PA, MI, IN, GA, LA, MA, SC, along with VE4 and VE3 land. At the end of the day when I uploaded my log to LOTW (Logbook of the World), I obtained 4 brand new states confirmed toward my WAS (Worked All States) award.
In thinking back, I believe this was the longest I have ever heard 10 meters open in the last 8 years. The solar flux hit 150 today almost beating the yearly high of 155 set back in March. Hard to believe we went from hardly being able to hear a peep on the band yesterday to a full blown 10 meter funfest today. Ah, the fun of Ham Radio!!
It was beautiful outside today and my original plans were working on my WARC beam (Hexbeam) project but when the 10 meter band opens, it trumps most any planned activity. With the large amount of sunspots lately, we can only hope this great propagation continues. You can sure bet in the coming days I will be keeping an eye on the Solar Flux, A and K indexes, and the DX Cluster. I worked several stations today who told me it was the first time they had worked Alaska on 10 meters. I have 15 states yet to hear on 10 meters but you can sure bet, I'll be looking for them.
Posted by KL8DX at 9:22 PM 4 comments:

Fall colors have peaked and the Sandhill Cranes are flying overhead on their way to their winter destinations. This summer like all the previous seemed short and I once again have lots to accomplish before the snow arrives. We have been camping this summer so between wet weekends and camping weekends, that left very few (if any) to get anything accomplished around the house.
I make sure that I have my Icom 703Plus when we depart on camping trips and when time allows, I always enjoy hooking up the rig to see what I can hear and work. I normally hear much more than I can work but that's the challenge of QRP.
I took this photo of my setup while we were camping on the Kenai Peninsula on one of our recent trips. I was surprised that the campground was pretty quiet! Probably due to the fact that with summer winding down, the campground was only partially full and we did not have anyone camping directly next to us when I set this up. There is nothing more fun than to hook up a rig and sit in the warm, bright sunshine playing radio. Very relaxing and also fun to see what I can hear from a different location. On the morning I took this photo, I was hearing Europe, Russia, and some lower 48 stations but mostly stations across the great pond. I tried a few CW contacts but my signal just was not making the trip but I did manage one PSK31 QSO using HRD (Ham Radio Deluxe) and DM780.
Even with only one QSO in the logbook, it was well worth setting up the portable station and listening to the band (20 meters). If we have our travel trailer in tow, you can sure bet that I have my portable set up with me.
Posted by KL8DX at 8:39 AM 4 comments: