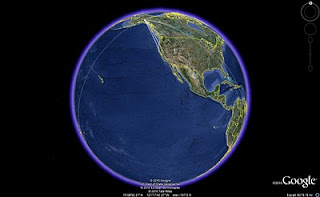 The last weekend in November is an exciting time for the contesting and DX'ing communities. The CQ World Wide CW Contest is one of the most popular contests on the calendar. Stations get on the air from all over the world and in 48 hours, they attempt to contact as many other stations as possible, searching for new Zones and Entities. Contests normally fill up the bands and at times, draw complaints from those not participating. I won't get started on that debate but no matter if it's a RTTY, SSB, CW, or any other contest, if the bands cooperate, these weekends can be lots of fun (not to mention you could work lots of new states, countries, zones, etc). Here is my final breakout from this past weekend.


I got a late start as I was just getting my station back together from realizing my repairs to my beam were in fact, successful. My beam was nested just above the roof so it took some time to get the feedlines, wire antennas, guys, all back in place. I did not finish completing this task until after the contest but I got enough done in the beginning to get me on the air.


It had been several months since I last fired up Win-test and took it for a drive down contesting lane. Since I don't operate much during the summer time, I had to retrain my brain to remember the finer details of this program, not to mention getting my macros all set up. Once that was done, I was ready on Saturday morning to jump in with both feet. My CW was rusty from playing this summer so my speed comprehension was not the best. This always changes by the end of the contest, after copying high speed code all weekend!


I started out by making a few contacts on Friday night on 40 and 80, but those were mainly helping me get the software playing the way I needed. My goal was to wake up the next morning (Saturday) and start fresh with a run. I prefer to find a somewhat clear frequency and call CQ in the hopes that I will get spotted and the masses will come to me. Normally that works, especially when you are in a state that counts as a multiplier, sometimes double, depending on the contest of course.  You can't be shy when operating from Alaska, as once you are found, oftentimes a pile-up you will find. 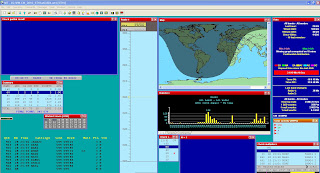 The Win-test screen shot on the right shows my final log tally and underneath the grayline map, you will find a snap shot of my operating times and rates. Again, nothing to write home about but what that does not show you is the excitement I had on 10 meters (28 MHz). At the very top of this blog, you will see a Google Earth depiction of some of the contacts I made on 10 meters (for those I could find grid squares for). I was overly excited to make 128 contacts on 10!  In Alaska, this is something I never expected to see in my log. K3LR was looking for Alaska on 10 meters and I went to 10 in hopes of catching them. I could not hear a peep out of K3LR but I did notice some other activity on the band when doing a quick glance at my spectrum scope on my Icom 756PRO. I found the band open to South America! Since I was not really competing in this contest, I decided to scan around on 10 meters and see what I could work. Some of the calls I worked right out of the starting gate were, HD2M, CE1/K7CA, LP2D, CE3FZ, CW3D, LW2HBF, LW4HBR, LU7HZ, just to name a few. I started to hear the lower 48 and I began hearing and working stations from the East Coast to the West Coast. Yep, I was in propagational heaven! Most of the stations I worked on 10 where from that run on 10.


My 10 meter opening lasted from 2053Z on the 27th, thru 2322Z. I picked up a station or two here and there afterward and even managed a few contacts on 10 the following day but this was by far the best opening I have experienced up here. I normally watch the beacon spots and tune 10 meters from time to time but this contest, I got lucky. You have to understand, 10 meters to an Interior of Alaska DX station, is like getting snow in Texas. It does not happen very often but when it does, it's lots of fun! I'm also hoping this is an indication of what is yet to come for 10 meters, now that the sun is beginning to be a bit more active.


And in speaking about the sun, a solar event kicked up absorption here in Alaska and on Sunday, the bands fell apart for a large part of the morning. They bounced back but nothing like Friday through Saturday night. All in all, this was a great weekend and I only wished I had more time to operate as this would have been the weekend for me to beat my personal high score in this contest.


One of the highlights for me was ZL8X calling ME on two bands! I had not chased their DXpedition as I was waiting for the beginning madness to fade off. And again, the biggest "falling off my chair" moment was when they called ME on 10 meters!!!


Alaska was once again well represented and it's always a pleasure to participate from this great state. It's hard to believe we just passed our 7th anniversary of living here in Alaska and working at Denali National Park. Not only does this hobby allow me to chat with people from all over the world, I have had several hams contact me and I have been able to meet them personally when they are on vacation here in Alaska, visiting Denali. I promote this park worldwide through my hobby and come to find, many I have talked with have visited here. The only thing bigger than an exciting weekend of DX'ing is Mount McKinley (Denali) at 20,320 feet, the tallest mountain in North America and it's right here in our backyard.


I appreciate all that called and gave me contacts and as always, I'm sure there are those I missed. It's great to be back in the saddle again and I'm looking forward to the rest of the contest season. It's dark and cold in Alaska, so it's very easy to spend a weekend on the radio making hundreds of contacts. In the summer time, I like to post a note on the shack door, "Closed For The Season".
Posted by KL8DX at 2:15 PM