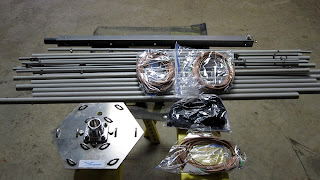 I recently received my Hex Beam from KIO Technolgy and was finally excited to retrieve it from the boxes it arrived in. It was carefully packaged and here pictured, are the parts laid out on two sawhorses. I used the sawhorses as the foundation by which to construct the antenna. This antenna is large enough that it's an outdoor project however, it can be easily deconstructed for the move to the tower as I built it in my garage.

The instructions are easy to follow and if you take your time reading, this is only a two hour project, three hour at the very most. If you have built one of these before, you can easily throw this together in an hour. I found that you really need to be most mindful of attaching the fiberglass spreaders to the base plate. Since these are not reinforced, you have to be careful when tightening them into place. Everything is well marked and the only issue that I had with mine was, one of the stop clamps were missing from a spreader. I had a few on hand so it was an easy fix.

I'm excited to add this antenna to my operational stock as it will give me another antenna for 20 meters but I'm even more excited to have a beam on 17 and 12 meters! I would imagine, once my Mosley is fully functional again, this beam will be used mostly on 17 and 12.  I only saw the need for a 3 band antenna as I have 10 and 15 meters available on my Mosley and I have 6 meter antennas. I'm also looking forward to testing this out in our extreme weather conditions. As seen from an earlier post, the fiberglass on my 2 meter / 440 vertical finally failed. With our high winds, extreme cold temperatures, this arctic environment is sure the place to test such things.

The beam is built and once I get everything off of the tower it will reside on, I will partially disassemble it and move it outdoors putting it all back together permanently. It is light and it should not be too much of a problem getting onto the mast. It will need to be raised with the bottom of the base plate against the tower and then lifted over top and placed on the mast. Due to the light but hearty construction, I don't expect much of a problem accomplishing this feat. It's wide enough that it could be a challenge if I had guys to contend with but that won't be an issue on my small tower. I'm sure I will need the assistance of my wife and as always, she is more than happy to be my ground crew manager.

All in all, my first impressions from the purchase and build of this antenna would rate it a 9.8 on a scale from one to ten.  I think having a reinforced section of the 1" thick fiberglass spreader where it attaches to the base plate would be a plus as it's obvious that even slightly over tightening these will cause the fiberglass to crack. I was also missing the one stop clamp on a 3/4 inch spreader but again, I had a similar one on hand.

In conclusion, I would highly recommend this company for their customer service, prompt and safe shipment, and ease of an antenna build. I like the fact that everything is pre-measured and well marked. Once I get this antenna in operation, I will post an overview of the performance. This antenna will only sit at about the 30 foot level so it won't be high but from other reviews, I'm hopeful that this will put many contacts in my logbook for 17 and 12 meters and also act as a back-up to my Mosley for 20 meters. I chose this company mainly from the reviews on e-ham dot net and also from some information I found on YouTube. I have no investment in this company other than telling it like it is. Stay tuned for part two of the Hex Build. Now I just need some free time and for the weather to cooperate. Something tells me that won't go as easily as the build did.
Posted by KL8DX at 8:56 AM