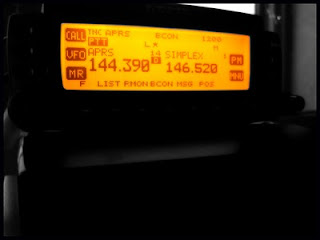 ARS KL8DX has been rather quiet over the last few months. Reason in part due to my HF energy overload sent along to my TA-34-XL. I have the director back together after receiving my replacement part quickly from Mosley. The weather however has kept me from putting my 4 element back in service. It has been hard to miss a few of the major contests that have taken place over the last several weekends but with any luck, it won't be long until I get my signal broadcasting outside this great state of Alaska. With the fact I have not been able to really get on HF like I would want, I have been concentrating my time on APRS. This summer I purchased two Kenwood TM-D700A's from a ham in southern Alaska. My plans are to run one mobile and the 2nd will be used in the shack. I also plan on putting a DIGI here that will rebroadcast any APRS activity northward. I needed some pieces parts to complete this project and now that they all arrived, I'm about to do the mobile install.

I found the Kenwood a bit complicated but once I got used to the menu system (pretty much an Icom person myself) things started to make sense. It took a bit of reading and I also had my long time friend and old neighbor Sean, KL1SF, on echolink. He helped me with a few of the settings and today, I put it all together and everything worked as it should. I downloaded the free Kenwood software from their website so I just need to copy the settings so I can upload them to the 2nd rig when I put it in service (with a few tweaks of course).

Losing my ability to use my 4 element HF beam over the last few months has made me look at other antennas. I wanted something that was small, that had good reviews, that could be used as a back-up or in addition to my Mosley. After doing research, I opted for the Hexagonal Beam by K4KIO.  I had this configured for 20, 17, and 12 meters. My goal is to use this for Asia during the winter contest season on 20 meters when I don't want to crank my beam 180 degrees from the lower 48. It will also give me two bands that I want to be a bit more active on. That beam should arrive this next week and I will construct it as time allows in the ol garage. It does not look like it will take too long to put together but the weather will probably keep me from getting it on the tower for a few months. But hey, I may be able to set it up temporarily and give it a spin.

With the holidays fast approaching, other priorities will take the front seat to this great hobby. Sometimes, life leaves no time for ham radio but that's the beauty of it, it's always waiting for you when time allows. Twenty-two years later, I enjoy this hobby as much as I did when I first took my Novice test back in December of 1987. It won't be long now before I will be eligible from AARP and QCWA! Where has the time gone?
Posted by KL8DX at 12:17 PM