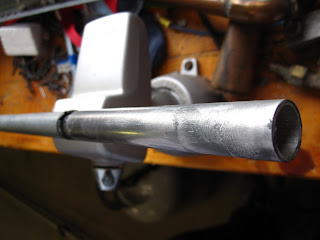 If you have been following my blog, I have mentioned that I began experiencing some problems with high SWR after a RTTY contest last year. I looked at some supporting documentation available from Mosley that helped me narrow down the issue to 15 meters. Each trap consists of two coils, with the inner trap catching 10 meters (band is still flat across the board), the second coil traps 15 (SWR off the scale) and 20 as it turns out, is a summation of the element (about 4.0 to 1 SWR in the SSB portion). Keeping that in mind, I knew I had to drop my beam and start pulling traps off of my elements to see which was producing my problem. Alaska has been seeing some pretty warm weather here due to a SE wind pattern so I took advantage to drop my driven element off of the boom to dive into the traps. I accomplished this yesterday and today I pulled the element apart.

If you have never used Penetrox, I would highly suggest it. One of my long time friends and one of the hams that helped me get my start into this hobby  suggested Penetrox. I have been using it ever since. When placed on connecting parts, it helps prevent oxidation without effecting the electrical characteristics of your antenna. I have had my beam up for several years now and when I pulled a piece of the driven element out of the trap, I found it to be in the same shape as it had been when I put it together a few years ago (see photo above). I will not build an antenna without this stuff! 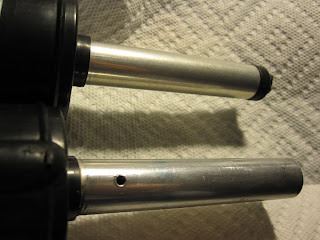 I proceeded to pull the traps off of the driven element and I found that the Penetrox did an outstanding job there as well. In the photo above, I just wiped off the excess (bottom trap in the photo) and it shines like the day I assembled this beam.  Now, keep in mind, I used this beam for several years when I lived in Ohio. It operated there, made the trip to Alaska, and has taken a beating with extreme weather we experience here. I'm happy to say, with continued preventative maintenance, this beam will probably outlast me.
As I tore into the one of the traps on the driven element, I could detect an odor that pretty much confirmed my suspicions. I also had a bit of difficulty getting the trap apart on one end. As I was finally able to muscle the inner workings of the trap from the housing, I found the following damage showing 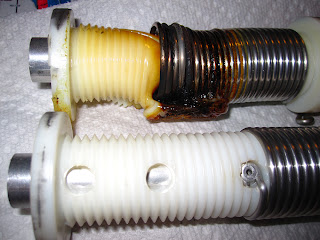 what happened during the RTTY contest I had been operating. I happened to make my best score yet in a RTTY contest but success came at a cost. 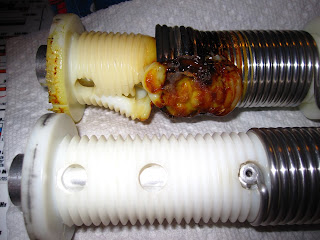 When I pulled both traps apart, I found only one had this extensive damage. I wonder what my chances are of having the problem in only one trap? I won't be able to tell until I either inspect each trap individually or repair this one and put it back on checking the SWR curve with my beam to see. The other issue is, the insulator is riveted onto the tube (as seen in the photo above). So, it seems I will be touching base with Mosely looking for parts. If I wanted to get replacement traps from Mosely, they quoted me a price of $478.60 for this beam. Thankfully, replacement coils only run $39.50 each!  Living on a tight winter budget, you can sure guess which parts I will be ordering!
I would purchase another Mosley antenna in a heartbeat! It has done well but even the best antenna's have their breaking points. This beam has survived extreme cold, high wind gusts over 70 mph, ice, and more. In the end, it was RTTY at high power that did it in. You need to know the limits of your equipment. From the Mosley website, the following graphic below describes the limitations of the Mosley TA-34-XL antenna which I should have paid a bit more attention to prior to banging out a RTTY contest on legal limit high power all weekend long. I am proud to say, the beam did not fail until many hours of high power RTTY operating (actually, the last few hours). I can't see myself owning any other manufactured antenna during my ham career. 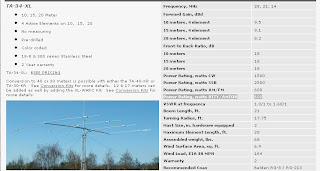 So, I can only hope that I can repair this trap and get it back in operation before the extreme cold and snow arrives. If not, I can always print this photo and keep it close as a grim reminder of what happens when you ask more from your equipment than it can take. My Ameritron AL-1500 might be enjoying the rest but I'm sure not enjoying the lack of activity. If I don't get this beam fixed, I may have to take up a new hobby for the winter as my 5BTV just ain't the same even though it's a good antenna.
Posted by KL8DX at 2:39 PM