Let's Contest Shall We? The Mosley is Back! 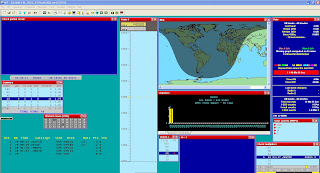 I have been tearing into my shack and working on doing some much needed maintenance. I was playing around with Win-test and noticed when I was doing antenna comparisons, that my HF beam was currently on position 2 of my remote antenna switch and NOT position 1, as I had previously thought. I don't have the five slots named (marked). With a bit of old age and my ongoing memory (or lack of) issue, I discovered that the repairs I made to my beam put it back in the game. If I had used my MFJ antenna analyzer, this would of been apparent to me when I first checked it but I accepted defeat when in fact, I had won.  I cranked up my antenna to its normal operational height and the signals sounded like I remembered them. I have a bit more work on my guys to get them back to normal but that won't take long, I just ran out of daylight.

I started using Win-test a few years ago but as with any software, if you don't use it all the time, you need to remember some of the finer settings (like macros). I spent an hour getting it configured and becoming reacquainted with the program with hopes of having some fun in the CQ World Wide CW Contest this weekend. My CW is a bit rusty but banging out several hundred contacts should do the trick.
Posted by KL8DX at 6:10 PM