Worth A Million Plus 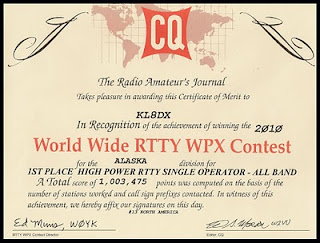 My certificate just arrived in the mailbox from my operating in the 2010 CQ World Wide RTTY WPX Contest.   I knew one was coming as I read the results in the July issue of CQ Magazine. I am always curious how I did. Alaska, in comparison, does not have as many contesters as most states but the few are the ambitious type who are very competitive.  Below is my 3830 submission shortly after the contest. As you can see, I had a few removed in the scoring process but I'm still excited about my result.
CQ WW RTTY WPX Contest


Call: KL8DX
Operator(s): KL8DX
Station: KL8DX
Class: SOAB HP
QTH: Alaska
Operating Time (hrs): 28.62
Summary:
Band  QSOs  Pts
-----------------
80:
40:  55  256
20:  695  1659
15:  148  338
10:
-----------------
Total:  898  2253  Prefixes = 457  Total Score = 1,029,621
Club: North Coast Contesters
This mode is one of my favorites but it can be extremely rough on the equipment. I'm not sure my AL-1500 has been right since this contest. As you can see, my operating time was 28.62 hours according to N1MM Logger. I was allowed to operate 30 hours as a single operator and wish I had put the entire 30 hours in. 40 meters is by far not a strong band for me but I was happy with what I was able to work.
My "hind sight is 20/20" moment after contests are normally if I spent too much time calling CQ and not enough time looking for multipliers. Depending on the contest, this can be crucial, especially to a small station like mine. You won't see any records broke by ARS KL8DX. I'm in it for fun but it's always nice to receive the culminating wallpaper for ones effort. With not very many KL8's roaming the streets during contest rush hour, I normally have people looking for me in prefix related contests. Sometimes I can be a double multiplier (depending on the contest) and once I'm spotted, I can't work stations fast enough. But again, I'm a DX'er by trade and a very amateur contester. My CW is far from fast and I'm still perfecting my digital macros. I hate SSB contests the most, probably due to the many very wide stations that I have problems tuning out when I'm next door to one. At least with RTTY, running FSK, I can narrow filter down and have some chance of hearing a weak station calling me, or coming back to me. The same applies to CW contests. For that very reason, you will find me in very few SSB contests.
I strive to learn from each and every contest with hopes of becoming better. I have never operated a full 48 hours in any contest and I guess the reason is, I'm there to have fun. So many factors weigh in which will determine how much time I will spend in any given contest. The main is the band conditions. I refuse to spend an entire weekend in my shack to yield a small amount of contacts. I can make better use of my time. Propagation is a huge factor living this far north and it always seems the solar wind kicks up over a contest weekend. Why is that?
With that said, I attempt to compete against myself from year to year. I will always try to beat my previous years score. This is the first time I have ever scored more than one million points in any major contest. Not a big accomplishment to many but I'm tickled with it. I think my 40 meter run was extremely beneficial to crossing this milestone. Again, strategy is a huge key determined by many "at that moment" factors.
In the end, I scored a grand total of 891 QSO's with 451 multipliers for a total score of 1,003,475. Had I busted a few more callsigns, I would have not made the million point club (not that there is one).  I can honestly say, as far as contests go, this was almost the best my small station could do in the time I operated. I believe my strategy played out well and luck was on my side. In the end, it was all those who called me and hung in there that made this score possible. My station is small so the signal is normally not very strong so thanks to those who go the extra mile to pull my weak signal from the atmosphere. My million plus certificate is now hanging proudly on my shack wall which seems to be filling up with certificates. No, it's not that I have received that many, it's because my shack is pretty darn small.
Posted by KL8DX at 1:23 PM