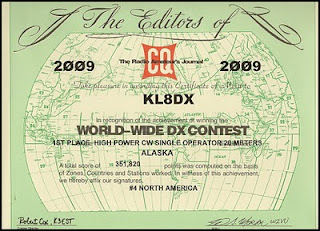 In checking our mailbox this weekend, I once again found a large white envelope addressed to my station. It was for my operational effort in the 2009 CQ World-Wide DX Contest - CW of course. Since my strongest band is 20 meters, I often enter the Single Operator, Single Band, 20 meter category. There are several categories but this one by far allows me to take full advantage of my strongest band, assuming propagation allows it. In looking back at my 3830 submission I see I wrote the following after the contest;

Call: KL8DX
Operator(s): KL8DX
Station: KL8DX
Class: SOSB/20 HP
QTH: Alaska
Operating Time (hrs): 26
Summary:
Band  QSOs  Zones  Countries
------------------------------
160:
80:
40:
20: 1646    27      70
15:
10:
------------------------------
Total: 1646    27      70  Total Score = 355,990
Club: North Coast Contesters
Comments:
This contest has it all, from excitement to frustration. My original
goal was to work an all band entry but that changed on Friday. Seems
our constant weather pattern as of late has been low pressure after
low pressure from the Gulf of Alaska. As it works its way into the
Interior, along comes the strong winds that accompany it. That kept
me off the low bands on Friday and I opted to start then as a 20 meter
single band. As the weekend progressed, the winds died down but I
decided to keep my pace on 20 and only QSY'ing for those that requested.
And as I write this, we are just now feeling the effects of yet another
storm forecasted to bring 75+ mph wind gusts over the next 48 hours.
Many great highlights and lots of on air friends encountered. I'm
still a greenhorn at pile-up management but had fun so I appreciate
the patience of everyone. Add in northern latitude conditions, some
interesting echo effects from signals, it can make for some really
tough times picking out a callsign, or even parts of a callsign.
Band conditions were pretty good into Europe this first night but even
with high power, it took some calling. The second night, the path over
the North Pole was far from good and it seemed like the only good
propagation from Alaska was into Zone 33. I was excited to snag 35
though which was surprising! Nothing heard toward Europe on 15 meters
from my station. As for anything toward Asia, I normally work them
off the back of my beam so a few more repeats are sent their way.
I kept checking 10 meters and I did not hear a peep on that band all
weekend. Tried one QSY to 10 but that yielded nothing. I also tried a
few QSY attempts on 15 but I got skunked there as well. On Sunday, I
kept getting several dupes so I confirmed my suspicions after the
contest and found a station posted me as KL7DX and not by my actual
callsign. It happens frequently.
I will update my blog with more contest details but in summary, this
turned out to be my best effort ever in a contest. Not much by contesting
station standards but from my small station, I'm excited to once again
reach another goal and milestone in my casual contesting career. I have
received lots of great information from the Alaska DX - Contest group
for which I am deeply appreciative.
Thanks again for the QSO's and may the holiday season bring you joy, good
health, happiness, and of course, plenty of DX.
73,
Phil KL8DX
Denali National Park, Alaska
Radio: Icom 756PRO
Antenna: Mosley TA-34-XL @ 43 feet
Amp: Ameritron AL-1500
I obviously busted a few callsigns but that is sure easy to do when my CW is not the very best at higher speeds. But, contesting is a great way to better your operating skill.  As we well know, the bands aren't always 599 all the time. I like the challenge as it helps me become more familiar with propagation, filters in my Icom, and just dealing with multiple stations calling me at once, which tests my mental filtering ability. I prefer to park and call CQ and manage stations rather than search and pounce but if my run totals fall low, I'm turning the VFO! The Alaska contest group here have been very helpful in providing me with operating tips which is crucial in this propagationally challenged part of the world.

With the help of contests, I have been able to achieve my WAS (Worked All States) on the 3 major modes (SSB, RTTY, and CW) not to mention my DXCC, which I will be submitting for here in the coming weeks with my LOTW contacts. My hopes are to continue my quest at operating the major contests this coming winter as there is not much more to do when it's 30 below outside and dark. I would love to have a "golden log" which I have yet to achieve. But, with goals and hard work, I'm sure it's possible. Gives me something to work for but either way, I'm proud to hang another CQ certificate on my wall of the shack.  QRZ?
Posted by KL8DX at 12:59 PM