No PB&J (Peanut Butter or Jack)! 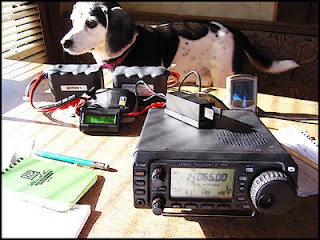 This past weekend, my wife and I headed out for our last weekend of camping on the Denali Highway. The weather the last few weeks here in our part of Alaska has been awesome! We were hoping to squeeze in one last trip with our new travel trailer before we winterized it. It was also the last weekend for the Polar Bear Club to have their last summer event. I thought this was a great opportunity to enjoy some of the great Alaskan outdoors and also do a bit of QRP portable operating. We headed out Saturday and planned on returning home on Sunday.

I did a bit of the Feld Hell Club's Hiram Sprint and while I was making trips around getting the trailer ready, I was calling CQ now and then. Before the contest ended, it was time for us to depart. We had an uneventful trip out to where we were going to camp for the night. I got the trailer set up and it was not long before I heard signals on the air, most being those operating the Washington State Salmon Run contest (CW of course). It sounded pretty good but my operating would be short lived.

After getting my station set up, I found I had an extremely high SWR on my portable antenna.  I had never before experienced this issue with my Buddipole so I began to try different configurations and troubleshoot my problem. I was not making much headway before being interrupted by a passing motorist who had an apparent flat tire (pretty much shredded). It was a young gal who was traveling by herself and after stopping her car not far from our trailer, she came walking back to my location asking for assistance.

The Denali Highway is mostly non-paved and is very well known for damaging many hundreds of tires each summer. I don't feel comfortable driving on the highway with only one spare, let alone none! And this was the case of this gal from California. She was driving a small Datsun 280Z, 1980's vintage, and she had no spare tire, or jack for that matter!

To make a long story short, I spent quite awhile getting to the point where I could get her car jacked up and her tire removed. She was able to flag down a passing motorist and catch a ride to Cantwell. A few hours later, she returned with a new tire on her rim. I assisted her with putting the tire back on her vehicle and getting her on the way.

After watching this very nice gal from California drive off, it was only a matter of minutes when I saw a truck pull off of the roadway behind where we had been camped. Turns out, it was a co-worker of mine!  He was out enjoying the nice weather and was looking for photo opportunities. I chatted with him as we watched the sunset and after he left, I spent the rest of the evening with my wonderful wife and our family beagle.

The next morning, I enjoyed the sunrise and once everyone was up and had breakfast, we decided to head on our way. I opted not to operate as we had a schedule to keep due to a busy week ahead. Things did not work out as planned for me, but my plans worked out for someone else. I was able to help someone in need on the Denali Highway. We made it home without any tire events but I hope to do some operating as Polar Bear 197 in the coming winter months. We have winterized our travel trailer but after I get my antenna issue resolved, I will hopefully be back on the air as /P with my QRP signal from some place in or around Denali. You may wonder why I mentioned Peanut Butter in my title and that was going to be my sandwich of choice while I was operating. That was replaced with a warm, sit down supper with my wife and our dog (who you see in the photo above). I may not have PB&J on my next adventure but I will for sure have my radio!
Posted by KL8DX at 8:17 PM