From Hell to SKCC And Let's Talk About 10, Shall We? 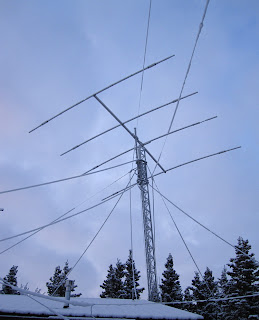 This past weekend saw the coldest temperatures at our location since this winter began. The thermometer dropped to -22F and everything was coated with Hoarfrost. This makes for a beautiful landscape and it also adds a interesting touch to our antenna's. I don't mind winters in Alaska, especially since I have a hobby that keeps me mentally enlightened during the short days. This would be the ham radio contest season.

Like with every contest season, I have those major contests that I hate to miss. I try to operate in most of the major CW and digital contests. From time to time, when I'm feeling brave, you may hear me on SSB. But either way, when most people are dreading winter, I look forward to it as the contest season is a chance to break up a cold and dark winter weekend and achieve hundreds (or thousands) of contacts that always help toward my award endeavours.

The ARRL 10 Meter Contest is one that I did not have high hopes for but with being able to work over 100 stations during the CQ World Wide CW contest on 10 meters, I had a glimmer of hope. Now mind you, I have a small station but I have known since moving here that my path to the lower 48 and Europe is pretty good. I also know that my Central and South America path is very reliable as well. My only challenge is the South Pacific and I think it has something to do with that large 20,320 foot mountain in my way. As I had mentioned in my earlier blog, early beacon reports made it appear the weekend was not going to be a bust but the spaceweather did not look promising. 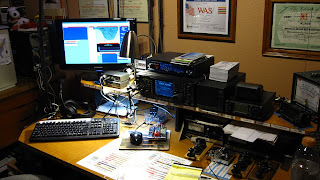 I prepared the station on Friday about and hour before the start of the contest. I got Win-Test set up and I was ready to go. When the contest started, I tuned the band and not a station was heard. I kept tuning and it was obvious that Friday night was going to be a bust. I figured I would wake up early on Saturday and wait for the band to open. Thankfully, I had the Feld Hell Sprint and also the SKCC Weekend Sprint to fall back on if the 10 meter band never opened. I worked a handful of stations in the Feld Hell Sprint and then finally moved to 10 meters in the hopes of catching any opening immediately. So much easier to see band activity with modern equipment. My first rig, an Icom IC-735, never had a spectrum scope so the days of tuning up and down the band are long gone. Now it's more of a visual exercise.

On Saturday, 10 meters began to open for me around 1925z. I made my first contact at 1937z with W0YK followed by PU5AAD in Brazil. It was not long before the contacts began to roll into my log! Propagation favored the West Coast but as the day progressed, the propagation path worked eastward. I started hearing 4's, 5's, and it was apparent the pipeline to South America was hot! Argentina and Brazilian stations were booming in! My last contact for Saturday was at 2305z with K6LRN. I finished my day with a bit of SKCC CW and threw in the towel.


On Sunday, I was hearing VE8EV on 10 meters and I finally was able to catch up with him at 1718z. This was more of a short local skip experience as he was pretty consistent into my location. The actual band opening began at 1831z on Sunday with my first contact being at 1842z with NK7U. My paths on Sunday were similar to Saturday but I was hearing a bit better to the east. I was also hearing deeper into the SE and there was a point I had a strong path to Texas, Louisiana, and Alabama. I also decided since I had several requests for SSB contacts, to run a bit on SSB. That yielded my best run rates oddly enough and also helped since multipliers counted again on SSB. I thought this was a good strategy for a higher score even though those QSO's were worth only 2 points as opposed to the 4 point QSO's on CW. It was all about the multipliers! There seemed to be lots of QSB on Sunday but requested repeats helped fill in the blanks.

In the end, my activities on CW showed I worked the following multipliers (see Win-test shot below)
.

Everything you see in blue was worked. The breakout is at the top showing 35 out of the 100 possible multipliers worked.

On the SSB side of things, you will find that I worked the following multipliers (see Win-test shot below)

Once again, everything highlighted in blue I was able to work. Much fewer but I did not spend that amount of time on SSB as I did CW. My rates on CW were nothing to write home about as my peak rate was 60. Oddly enough, even though I worked fewer multipliers on SSB, my best rate was 101! My main SSB activity window was from 2001z to 2115z on Sunday.

In the end, this contest turned out to be much more than expected. It did not hurt that the expected solar wind did not hit the earth and that predictions reduced geomagnetic activity to less than 25%. That was good news as absorption was not going to be a factor. It was a wild ride while it lasted and it brings expected excitement for future contests on what 10 meters could provide. My 3830 submission is listed below. Thanks to those I worked for all the QSO's and to those I did not work, let's hope propagation will be in our favor during future contests.I would really like to complete my 10 Meter WAS (Worked All States) award before we decided to relocate to a warmer Harley environment in the years ahead.

I tuned into 10 meters at the start of the contest but as expected,
not a peep heard. The contest did not start for me until 1925z on
Saturday. The first few signals were noticed on the spectrum scope
on my IC-756PRO at that time. It was not long before the band sprung
to life.

On Sunday, ten meters opened a bit earlier, 1831Z for me. Sunday not
only opened earlier but I think the band was stronger. The CQ WW CW
contest started the 10 meter activity as I was able to work over 100
stations. This weekend blew that weekend off the map!

10 meters never produced any propagation for me into the NE but the
SE was booming in. It seemed we had a pipeline to South America as
well.

Several stations asked for SSB contacts so I ended up doing a mixed
entry. I normally stick to CW and avoid the SSB contests anymore but
my best rate was actually on SSB. 10 meters is, and will always be,
the exception to my SSB avoidance rule.

The QSB got a bit tough at times and that was the main reason for many
of the repeat requests. It was also challenging to break through the
back of the lower 48 antennas as many were pointed to Central & South
America.

I filled in my weekend operating fix by participating in both the Feld
Hell Sprint and SKCC's Weekend Sprint when 10 meters had no activity.
Our temperatures dipped to -22, so it was a perfect weekend to stay
indoors and play radio.

The highlight for me was the entire contest! With only 6 meter contacts
being rarer than 10 meters, any contact on 10 is a highlight. To me, the
entire weekend was priceless! I just can't wait to see what the next few
years bring for 10 meters. WAS for me? Only time will tell...

Thanks for the QSO's and I hope each and every one of you has a safe
and happy holiday season.