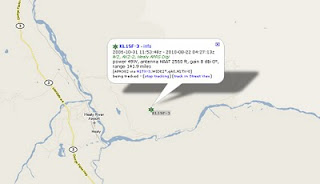 There is a popular location for antenna's not far from Healy, located at the Usibelli Repeater Site. This site has a great view of Healy and has line of sight communications into Fairbanks. Topping out in the area of 3800 feet, this wind blasted mountain top has been the home to some ham radio activity, or it was until this weekend.

KL1SF has had an APRS Digi at this location for several years. This has allowed many a visitor running APRS to be heard and relayed into Sean's I-gate as they travel north and south on the George Parks Highway (RT 3). This was also a very reliable link to Fairbanks. APRS has grown very popular as many people had packet equipment from the early days and this was / is a perfect way to keep those TNC's working. 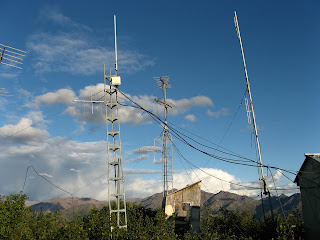 As in life, all good things must come to an end and that is what happened this weekend with KL1SF-3 located on "Antenna Hill" overlooking Healy. Sean and his family are relocating to the Grand Canyon and his equipment is going with him. Sean and I had not been up to check on his equipment for at least two years. We access the area by ATV and depending on the time of year, the ride can be (and normally is) not for the beginning or faint of heart. Our recent dry weather allowed an easy transition up to the repeater site and Saturday, August 21st, 2010 Sean's APRS Digi went silent. Sean unplugged the equipment and took down his Cushcraft 124WB and we carried it down the mountain with us. I know it was a sad day for Sean but you will once again see him active on APRS from Arizona, I'm sure. His packets will be heard once again in the coming weeks.

I was deep into the packet craze many moons ago and I have a TNC on the shelf. I have plans of filling the gap in Sean's absence. It will not have the range or coverage that Sean's digi had (yes, I could use the same location but getting there can be extremely challenging especially in the winter months when I have no way to sled up there) but I'm hoping to fill some of the void. In the coming weeks, I plan on firing up my packet station and putting it to use once again. My KPC-3 has been silent on the shelf and I'm sure it will be glad to be brought back to life. I should have a pretty good path to Nenana so I'm hoping that this will give coverage from Nenana south, possibly south of Denali National Park's main entrance.

Last year Sean and I were asked about removing the KL7KC repeater which was also in the same location as Sean's APRS equipment. This repeater had apparently been having technical issues and it was determined that it should be removed.  Possibly as Sean, KL1SF had a two meter repeater that covered Healy for the last few years anyhow. Sean and I had plans of removing the KL7KC repeater last fall but the weather beat us and conditions deteriorated to the point we could not make the trip. After making the trip up to remove Sean's APRS equipment, I wanted to make a trip back up the following day and retrieve the KL7KC repeater as the weather forecast looked promising.

Sean was busy preparing for his move so my wife and I made our way up to Antenna Hill. It did not take me long to unplug the repeater and remove it from it's resting place. We carried it out to my ATV where it was carefully placed into my ATV trailer for the trip back to my QTH. The ride is a bit rough 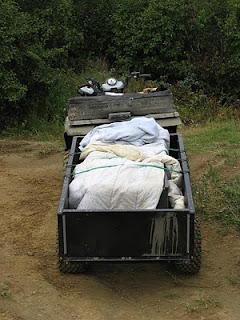 and an old comforter we had helped make the trip more comfortable for the retired repeater. I was glad it fit but being as large as it was, it was not very light. This made for an interesting decent down the mountain but we safely made it by taking our time and my wife watching from behind for any potential problems. It was only a matter of a few hours after our departure from home that we made it back with the repeater which will be returned to the rightful owner.
So in one weekend, three ham radio related communication stations fall silent. KL1SF's APRS Digi, his 2 meter repeater, and also the KL7KC repeater. This is a small town with very few active hams. I'm not sure many will notice the change but change is inevitable. It's was a sad day for sure, to see a close friend and his family leave. Not only will I NOT see them at work, I won't be seeing their APRS activities here locally any longer. But, I'm looking forward to tracking Sean's progress as he heads down to the lower 48. APRS is a great tool for that very reason. He may no longer live just a few miles away but with ham radio, distance is really not a problem. We will just be communicating with another band, moving from 440 to HF. I am looking forward to the day that Sean gets his station back on the air from his new location. I'm not a big SSB fan but that is about to change (as Sean does not operate CW). Safe travels my friend and enjoy the DX that you have missed out on while living in Alaska.  Yes, I'm looking forward to hearing the stories of you working 10 and 6 meters again and possibly 2 and 432! The aurora curtain will no longer keep you from filling your log but don't forget, spin that antenna north from time to time as your long time friend will be looking for our next QSO. 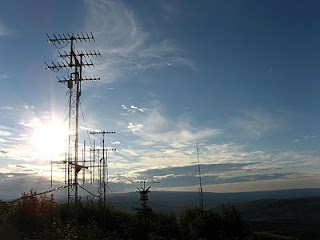